Being Smart with Ducts in Conditioned Space

Designing and locating the HVAC ducts (and the air handling unit (AHU)) within the home's conditioned space can minimize energy losses significantly by increasing the operating efficiency of the HVAC system in your home.. As per studies by US Department of Energy (DOE) and EPA, moving ducts within the conditioned space can reduce cooling and heating loads by over 10%.

Even if ducts are well insulated there could be leakages at some points (damaged/ decaying insulation (over time)), causing loss of conditioned air, or if the ducts are located in vented attics or crawl spaces there could be energy losses because of temperature difference (delta).

One of the best ways to accommodate ducts in conditioned space (also possible in case of late design stage intervention and retrofitting) is using dropped false ceiling - one can drop the ceiling within the circulation space (ducts run in the circulation space) to accommodate the ducts within the conditioned space. The AHU can be located in the closet and the supply registers to individual rooms can be on the wall surface adjoining the corridor, thus maintaining the height of individual rooms. 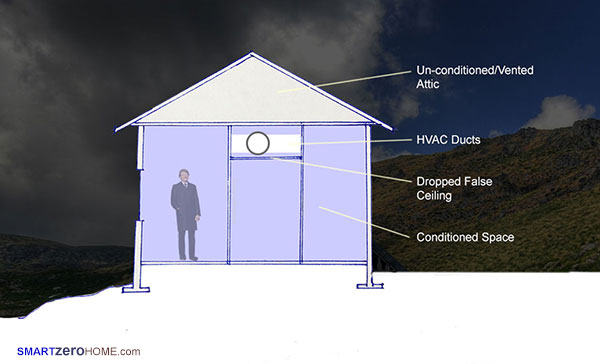 There are other ways of locating ducts in conditioned space, such as insulating the attic and laying the ducts in the attic. This will be cheaper to implement but will be more expensive, requiring larger HVAC and resulting in higher energy bills, as the entire attic becomes part of the conditioned space (increasing the volume that needs to be conditioned by the HVAC system).

See our pick of the best Whole House Fans, best Furnaces, and the best ACs in the market.

How to Choose the Best Furnace for your Home

Top 5 ACs in the Market Today